Home China News Don’t be fooled. The US and China have done a deal, but...

Hopes were high for a US-China detente following recent confirmations by both sides that a trade deal would soon be signed, and even the cancellation of the Asia-Pacific Economic Cooperation (Apec) leaders’ summit in Chile did not dampen the optimism.

US President Donald Trump and his Chinese counterpart Xi Jinping were slated to sign the first instalment of the accord in Santiago, where riots and anti-government protests forced the authorities to call off the November 16 to 17 event.

Diplomats will no doubt clear up the minor setback and arrange another meeting to seal “phase one” of the trade deal, which negotiators are finalising after the 13th round of talks ended on October 11 in Washington.

But while the interim deal suggested a thawing of tensions after 18 months of tit-for-tat actions in the
US-China trade war, it is not much of a breakthrough.
US-China trade talks: the five mistakes Trump’s team keeps making

Washington agreed to defer a set of tariff hikes it had planned for October 15, in exchange for a host of Chinese concessions. But these were the same terms as those agreed upon before the May tariff escalation, when Washington accused Beijing of reneging on promises and abruptly withdrew what US Treasury Secretary Steven Mnuchin had said then was a 90-per-cent done deal.

The fact is that global peace and economic growth remain at risk as the prospect of the US and China reaching a trade agreement remains as uncertain as before, with the two sides remaining as steadfast as ever to their stances on a range of thorny issues that have plagued bilateral ties since China was admitted to the World Trade Organisation in 2001.

The hard fact is that disagreements and differences between the US and China have widened remarkably in recent years due to both China’s rapid growth and the US’ slowing economy after its subprime-induced financial crisis. Washington also sees China as regressing politically, as the country under Xi moves to embrace orthodox Marxism, repressive Leninism and ultra-leftist Maoist policies.

The widening differences on everything from technology to finance are exacerbating the economic imbroglio engulfing both countries, which has profound implications on their respective interests and national security.

The phase-one deal may satisfy both sides’ short-term goal of alleviating the economic pain of the tariff war, but it does not provide any incentive for a more comprehensive agreement.

Washington’s refusal to rule out the additional tariff in December highlights the administration’s lack of trust in Beijing, insisting that tariffs could only be removed when China carries out its commitments sincerely. But the dispute is not only about trade, it is also about technology, currency and rule-setting in the integrated global economy. What Washington wants most are structural market reforms in China, which are linked to the party-state’s role in economic activities and the Communist Party’s philosophy of power.

Kushner says US has reached ‘fabulous’ trade deal with China
Since coming into office, Xi has strengthened the party’s domination in economics and solidified his personal grip on power. Trump, who prides himself as a deal maker, has succeeded in making deals with America’s long-time trade partners and allies, such as his US-Mexico-Canada Agreement signed in November last year. The US leader is hoping to reach similar deals with other free democracies, such as G7 nations, Australia, Japan and South Korea.

But there is still a long way to go before he can attain the “Grand Deal” with China. 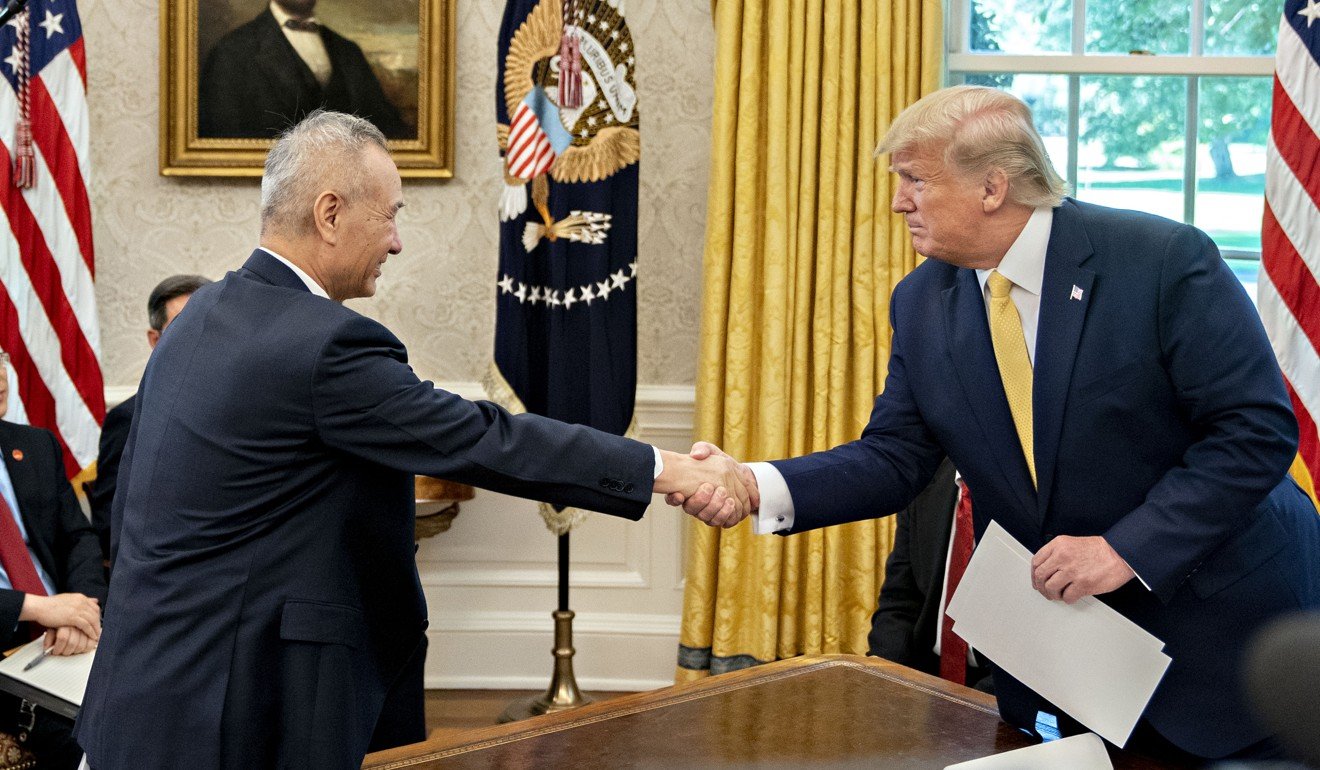 US President Donald Trump shakes hands with China’s vice-premier Liu He at a meeting in the Oval Office on October 11, 2019. Photo: Bloomberg
Washington’s decision to break the agreement into parts, and the lack of any significant US compromise, indicate the challenges that Trump faces in reaching a comprehensive deal.

The best path forward in securing a phase-two deal may lie in how many sweeteners Beijing is willing to offer in exchange for the removal of the remaining duties on Chinese imports.

But Xi, a Maoist leader, would reject any reforms that might undermine the one party-ruled political system and weaken the party’s power.

As they become the world’s main economic rivals and chief political adversaries, there is no doubt the US is seeking to contain China, while the Middle Kingdom is looking to challenge US leadership on anything and everything, on both a regional and global scale.

Their perceptions of each other as a major security threat have led both Beijing and Washington to react to the changing geopolitical environment with aggressive whole-of-government efforts ranging from trade to technology, ideology to human rights, and diplomacy to defence.

Just on Wednesday, US Secretary of State Mike Pompeo started a series of speeches on “the challenge of China”, saying that Beijing’s policies are hostile to Western interests.

Under such antagonistic relations, the road to free trade will be as rugged as the path to peace and prosperity.