For Hong Kong’s tycoons, it was almost as if the good old days had returned. Late last year, as protests raged on the streets of Hong Kong, companies controlled by five of the territory’s seven richest families competed for the biggest plot of land ever put up for auction in the territory.

All the bids were at the lower end of the government’s valuation range and Hong Kong’s biggest developer, Sun Hung Kai Properties, walked away with the prize for HK$42.23bn ($5.4bn). If calm does eventually return to a city rocked by months of often violent pro-democracy protests — and prices rise — SHKP, controlled by 90-year-old matriarch Kwong Siu-hing, will make a huge profit from the residential and commercial development.

This would have seemed a remote prospect for Hong Kong’s richest families just a few months ago, as they scrambled to avoid blame for the escalating crisis. In the early phases of the protest movement, Hong Kong and Chinese officials sought to characterise it as an economic phenomenon, sparked by sky-high property prices and stark social inequality.

Li Ka-shing, the city’s richest man, was accused in an article posted by China’s Central Political and Legal Affairs Commission on its official WeChat account of “condoning crime” after he called on authorities to offer an olive branch to the protesters.  The scrutiny of the tycoons and their heirs threatened to upend a capitalist paradise.

For decades, Mr Li, Ms Kwong and their peers and heirs have profited from controlling a range of official or de facto monopolies in sectors such as property and retail. The companies regularly churn out massive dividends that — like all other capital gains in Hong Kong — are not taxed.

When the former UK colony came under Chinese sovereignty in 1997, Hong Kong’s new Communist rulers did not disrupt the tycoons’ cosy existences. All that Beijing wanted was that the territory be governed by “patriots”. “We don’t demand that they be in favour of China’s socialist system,” Deng Xiaoping, then China’s paramount leader, said.

“We only ask them to love the motherland and Hong Kong.” This laissez-faire approach had dramatic social consequences, especially after the global financial crisis ushered in a decade of quantitative easing and low interest rates. Hong Kong maintains its own dollar-linked currency, forcing it to follow the US Federal Reserve’s interest rate adjustments in lock-step. “Thanks to QE, asset prices exploded,” said one senior Hong Kong government official, who asked not to be identified.

But there has been no serious effort to tax their earnings. “Capital gain and inheritance taxes would affect the entire business sector,” the official added. “It’s not just about four or five families. If you’re not careful, you can kiss Hong Kong’s wealth management industry goodbye.”

At the same time, it became harder for people to get on the property ladder. As a result, Hong Kong, with a population of 7.4m, is one of the most unequal societies on the planet. Its Gini coefficient, at 0.539, is comparable to those of Zambia, the Comoro Islands and Guatemala. London, by contrast, has a Gini coefficient of 0.41, with 0 representing perfect equality and 1 perfect inequality. 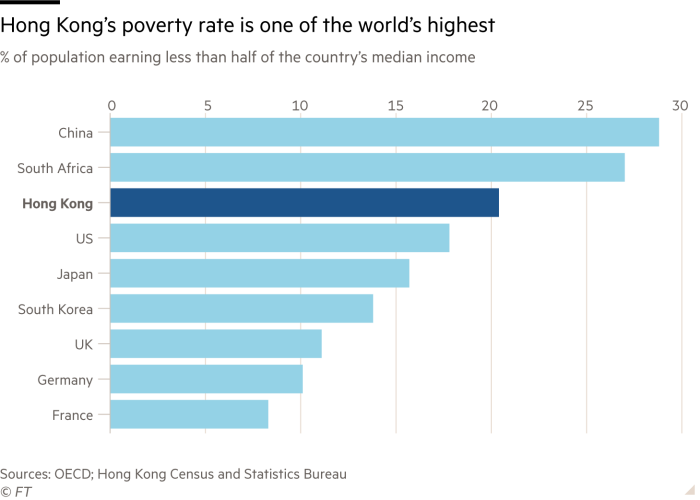 Housing is a particular challenge. Hong Kong has an average per capita residential space of just 172 sq ft, according to the Asia Global Institute at the University of Hong Kong, compared with 387 sq ft in Shanghai. About 45 per cent of Hong Kong’s 7.4m residents live in small and poor-standard public housing, with long waits for those hoping to get a subsidised flat. Median home prices in the private market are more than 20 times median household incomes.

“The whole system needs to change,” said one senior Hong Kong government adviser. “The government’s laissez faire policies have looked after the haves and people who owned property made a fortune. But the have-nots have been totally isolated.”

In September, Chinese state media outlets criticised Hong Kong’s tycoons for the lack of affordable housing in the territory. In response to the criticism, Adrian Cheng — whose late grandfather founded New World Development, a ports, property and retail conglomerate — announced that the group would gift 3m square feet of land to the government and charitable groups for subsidised housing developments. “We are very concerned about [Hong Kong’s] housing problem,” Mr Cheng said at the time.

Such gestures appear to have initially helped defuse the criticism. Pressure from Beijing on the tycoons began to abate after a new wave of violent protests in early October, which continued through mid-November and flared up again over the Christmas holiday.

In response, Chinese officials emphasised the importance of “patriotism” in the territory and a cessation in the violence over any examination into the socio-economic causes of the unrest, which they now routinely blame instead on “hostile foreign forces”. But for the territory’s richest families, the respite may not be a permanent one.

On December 23, Beijing’s de facto embassy in Hong Kong, the Central Liaison Office, emphasised the need to “face the flaws and shortcomings of Hong Kong’s governing system” and “resolve the deep-seated conflicts and problems that have accumulated in society”. A fortnight later Luo Huining, a Chinese Communist party heavyweight with a reputation for getting to the root of difficult problems, was appointed as the office’s new director.