Home World News Europe Why Europe is not ready to take sides in the US-China trade...

The European Union is not yet ready to join forces with the United States against China despite the recent rapprochement between Washington and Brussels, analysts have said.

The assessment came after the EU and US reached a deal late last month to suspend new tariffs and expand European imports of US goods after high level talks and negotiations, an agreement that was seen as a worrying sign for China amid its trade war with Washington.

The agreement reaffirms the alliance between the two sides, even though Beijing has stepped up is lobbying of the bloc, according to diplomatic observers.

“This is exactly the sort of outcome you would expect with a sort of balancing act,” said Jan Weidenfeld, an analyst of Europe-China relations at the Mercator Institute for China Studies in Berlin.

“I think what this shows is really that opportunities for a genuine alignment of European and Chinese global trade and investment policies remain slim.”

Over the past months, Beijing has been working to strengthen its ties with Europe but has also warned it not to turn against China.

Following talks last month, both sides said they were “strongly” committed to resisting protectionism. This followed another high level meeting in June where they agreed to set up a working group to revamp the World Trade Organisation.

On July 6, when both China and the US imposed the first tranche of tariffs on each others’ products, Foreign Minister Wang Yi warned Europe not to “stab China in the back” because Beijing was at the forefront of efforts to protect the global trade regime.

The deal between Washington and Brussels in late July – which included agreements on lowering industrial tariffs and increasing Europe’s purchases of US soybeans and liquefied natural gas – alleviated the tensions between the US and the EU. 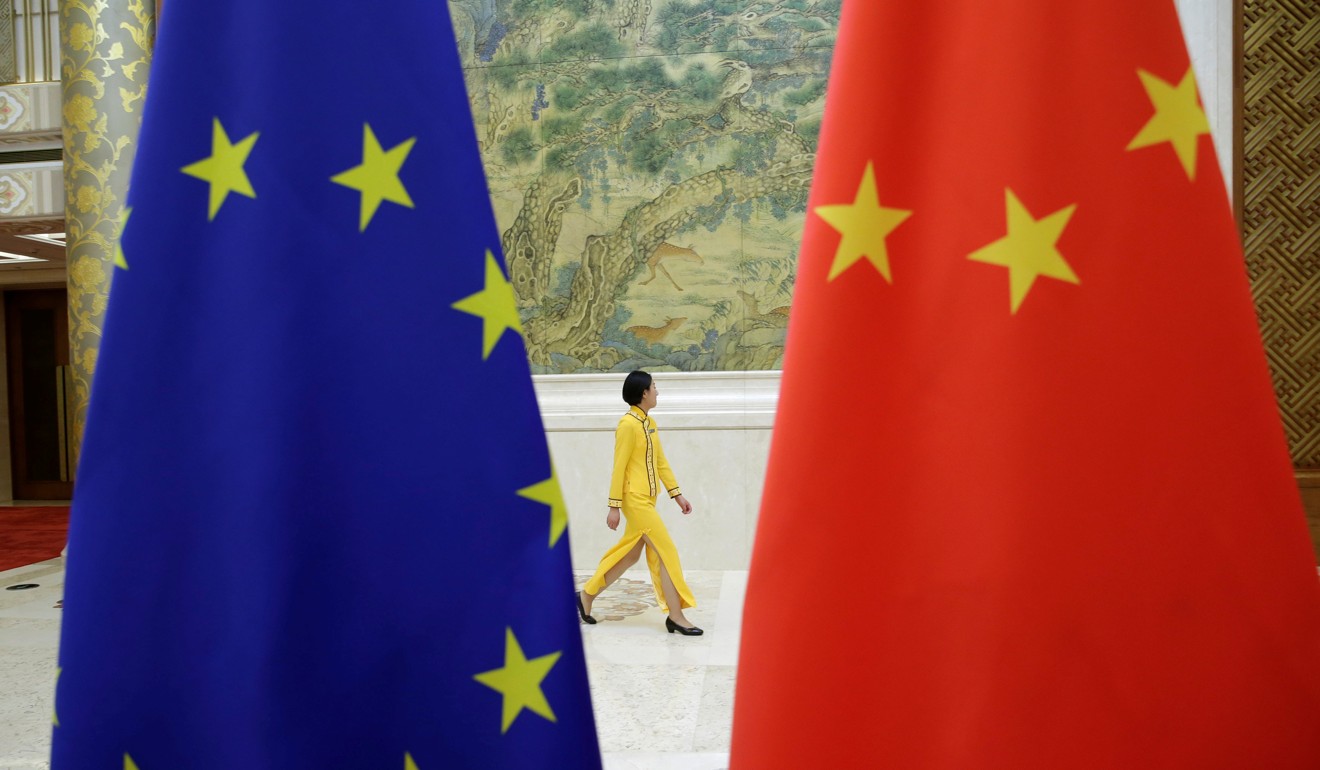 The EU and the US share similar concerns over China’s trade and economic practices, such as giving subsidies and preferential treatment to state-owned enterprises while restricting the access of foreign companies to China’s market.

But analysts said it was still too soon to say the two sides had teamed up to counter China.

“I don’t think that the Europe has stabbed China in the back,” Bai Ming, a senior researcher at the Ministry of Commerce, said, adding that the trade policies of US President Donald Trump were still a big concern for Europe.

“China is the second largest trading partner of Europe. The economic and trade relations between China and the EU are very important, even though the two sides have frictions.”

Despite the rapprochement between Brussels and Washington many in Europe are wary about getting too close to the US.

French President Emmanuel Macron said the talks between US President Donald Trump and EU Commission chief Jean-Claude Juncker were “useful”, but that he was “not in favour” of a “vast new trade deal” with the US, saying European standards in environmental protection, health and food should be maintained.

“I don’t think Europe has reached a consensus regarding this deal,” Bai said.

Since coming to power, the US president has withdrawn from the Paris climate change agreement and pulled out of the Iran nuclear deal, which China and the EU still support.

Trump’s interventions in European affairs have also caused tensions with some of the bloc’s leading figures.

Last month he praised the new populist Italian government’s “very firm stance” on border controls, much to the dismay of Macron and German Chancellor Angela Merkel.

“It’s far too early to talk about US-EU cooperation with regard to China. The US and EU first have to settle their own issues,” said Derek Scissors, a China researcher with the American Enterprise Institute in Washington.

But observers said the EU and the US may step up scrutiny of China at the World Trade Organisation, and press hard for it to speed up the process of opening its markets to foreign companies.

A joint statement released by the US and EU following talks between Trump and Juncker said the two sides would address unfair trading practices such as intellectual property theft and forced technology transfer at the WTO – which is seen as a veiled criticism of China.

However, the EU and China are continuing negotiations for an investment agreement.

A spokesman from the EU mission in China said the EU hoped Beijing would have a “similar level of ambition” as the EU in opening up its markets.

“The EU is not disentangling itself from its close ties with the US, and jumping ship, moving closer to China – it doesn’t seem to be happening and that statement is a strong reaffirmation,” Weidenfeld said.

Europe had long been using the carrot and the stick with China, on the one hand pressing hard for market access but on the other taking a supportive stance towards market reforms, he said.