Fintech is Europe’s largest venture capital (VC) investment category, receiving 20% of all VC investment in the region between 2017 and 2019 year-to-date (YTD), surpassing enterprise software (17%), health (13%) and transportation (8%), according to the State of European Fintech 2019 report by Dealroom, in partnership with Finch Capital. 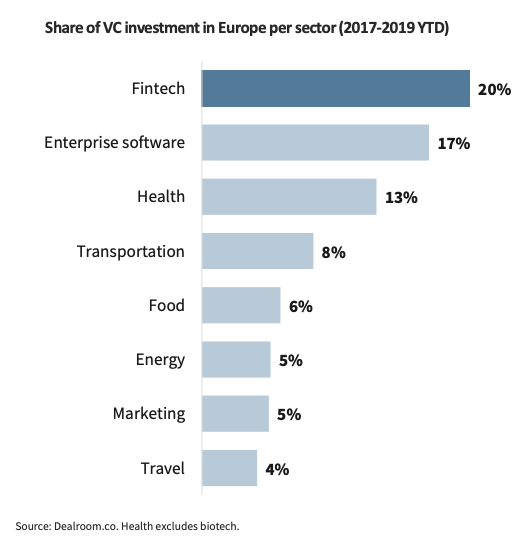 Share of VC investment in Europe per sector, the State of European Fintech 2019, Dealroom, Finch, October 2019

In Europe, fintech investment is gaining momentum, outperforming Asia for the first time since 2015 with US$5.1 billion raised by European fintechs in H1 2019, against US$2.2 billion for Asian fintechs.

European challenger banks and payments companies have raised the largest chunk, with both categories raising EUR 2.4 billion in 2019 so far. Lending and mortgage and wealthtech are two other popular segments, raising EUR 1.4 billion and EUR 8 billion respectively so far this year.

Among Europe’s biggest fintech investors, the report names Seedcamp, Speedinvest and Global Founders Capital (GFC) as the top three seed stage investors in the segments of banking and payments with 31, 26 and 24 fintech deals respectively. Finch Capital (18 fintech companies), Index Ventures (12) and Anthemis Group (12) were found to be the most active investors in Series A and Series B, while Goldman Sachs (6), Augmentum (5), and Draper Esprit (5) were the top investors in late-stage.

In proptech, it is Pilabs (17), Seedcamp (10) and GFC (8) that are the most active seed stage investors. For Series A and Series B, it is Atomico (4), Idinvest Partners (4) and Finch Capital (4), while top late-stage proptech investors are Augmentum, Draper Esprit, Goldman Sachs, Israel Growth Partners and Northzone, all recording one proptech investment.

Europe’s fintech success stories began in the payments sector with superstars like Skrill, Wirecard and Adyen. But this rapidly expanded beyond payments, and today, Europe is home to startup unicorns and rising stars across nearly all major fintech verticals.

In digital banking, there are Germany’s N26, as well as the UK’s Monzo and Revolut.

In lending and mortgage, European fintech unicorns include OakNorth, a UK-based SME lender, Greensill, a UK-based provider of working capital finance for companies globally, and Lendo, an independent loan broker based in Stockholm.

In insurance, esure, an Internet and telephone based insurance company based in England, is the only player that have joined the startup unicorn club. In blockchain, it is Bitfury, a leading blockchain security and infrastructure provider and hardware manufacturer originally from Europe but with now offices across the world, and in artificial intelligence (AI), it is UiPath, a company that develops a platform for robotic process automation originally from Bucharest, Romania.

The report also addresses key trends emerging in Europe’s fintech sector. In particular, it notes challenger banks’ transition from monoline to multiline services as they expand beyond holding customer deposits or issuing credit and debit cards, to tackle other fields including wealth and insurance.

In wealthtech, it notes the rapid adoption of AI to improve investment decision, and claims that robo-advisor platforms as well as blockchain technology are now making asset management more accessible and customized. The document cites the examples of Scalable Capital, a digital asset management that uses proprietary software to offer portfolios that are optimized with a primary focus on risk management, as well as ScalingFunds, a “funds-as-a-service” technology platform developed by Brickblock that provides fund managers with blockchain-based investment solutions.

In terms of tech, it is AI and open banking and APIs that have received the most funding in Europe, both categories raising EUR 480 million in VC investment so far this year. AI is set to help companies save US$1 trillion by 2030, while open banking and APIs have emerged as a major trend, particularly in the areas of instant payments, peer-to-peer lending and credit scoring.