Hong Kong, A $20-billion bridge connecting Hong Kong and Macau to the mainland Chinese city of Zhuhai is set to finally open this week, marking the completion of the longest sea-crossing bridge ever built, nine years after construction began.

Chinese President Xi Jinping is expected to attend a ceremony in Zhuhai on Tuesday, along with top officials from Hong Kong and Macau, with the bridge opening to public traffic Wednesday.

The 55-kilometer (34-mile) bridge was originally due to open in 2016, but repeated delays pushed that to this year.

It is a key element of China’s plan for a Greater Bay Area covering 56,500 square kilometers (21,800 square miles) across southern China, and encompassing 11 cities, including Hong Kong and Macau, that are home to a combined 68 million people.

Proponents of the idea say the bridge will cut journey times between the cities from three hours to 30 minutes, which they say will enable commuters and tourists to easily move around the region.

Despite the focus on drive time however, private car owners in Hong Kong will not be able to cross the bridge without a special permit. Most drivers will have to park at the Hong Kong port, switching to shuttle bus or special hire cars once they are through immigration. Shuttle buses cost $8-$10 for a single trip depending on the time of day. 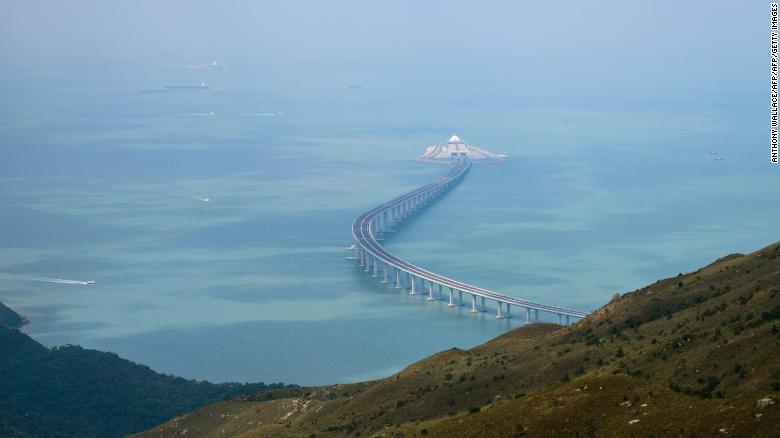 In this photo taken on October 7, 2018, a section of the Hong Kong-Zhuhai-Macau Bridge (HKZMB) is seen from Lantau island in Hong Kong.

The bridge project has come in for fierce criticism in Hong Kong, where there was little public demand or appetite for greater links to either Macau or Zhuhai, and fears the city will be swamped by tourists from mainland China.

For critics of the Chinese government, the bridge is seen as a tool to drag the city — which boasts a semi-democratic legislature and independent judiciary and has seen numerous mass protests in recent years — closer into Beijing’s grip. 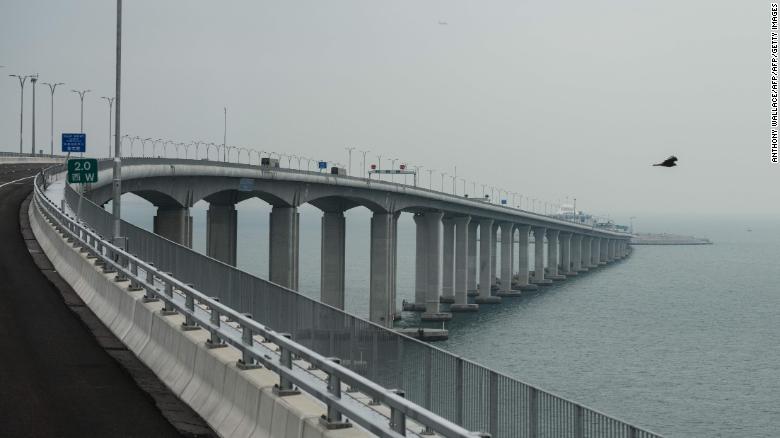 The world’s longest sea bridge, connecting Hong Kong, Macau and the Chinese mainland will open to traffic on October 24, 2018 officials said, after complaints about the secrecy surrounding the project.

“You can’t see the existing transport connections — in a literal way. But this bridge is very visible … you can see it from the plane when you fly in to Hong Kong, and it’s breathtaking,” lawmaker Claudia Mo told CNN earlier in the year.

“It links Hong Kong to China almost like an umbilical cord. You see it, and you know you’re linked up to the motherland.”

Mo and other critics also point to the huge amount of money spent by Hong Kong — upwards of $9 billion — while the city is dealing with an acute lack of public housing and widespread poverty.

“Hong Kong has had to fund a lot of the bridge, but we won’t see many benefits here,” Mo said. 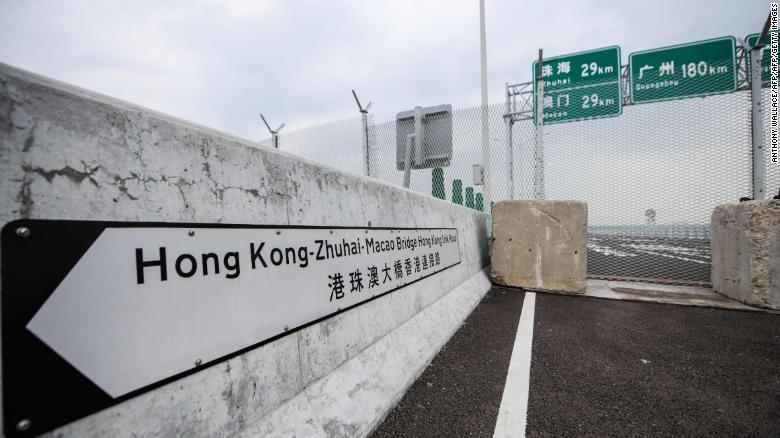 A general view shows a barrier on the Hong Kong side of the Hong Kong-Zhuhai-Macau Bridge (HKZM) on October 19, 2018, five days ahead of its opening ceremony.

Built to withstand a magnitude 8 earthquake, a super typhoon and strikes by super-sized cargo vessels, the bridge incorporates 400,000 tons of steel — 4.5 times the amount in San Francisco’s Golden Gate Bridge.

While an impressive engineering feat, the building of the bridge brought its own controversies. The Pearl River Delta is home to an endangered Chinese white dolphin population that has been buffeted by massive land reclamation efforts in Hong Kong and other cities.

Conservation experts previously told CNN they feared the bridge, as well as ongoing expansion of Hong Kong airport, could be the final nail in the dolphins’ coffin, sending the local population into terminal decline.

In response to environmental concerns over the bridge, the Hong Kong government has provided for the creation of extra marine parks to protect dolphins and other aquatic life, but some experts say this may be too late to reduce the effect of the construction already carried out.

The bridge has also faced considerable public criticism over safety standards. Seven workers died in constructing the bridge, and another 275 were injured. Hong Kong officials have previously blamed the death toll on lack of manpower, and earlier this year a court fined several subcontractors over the issue.