Home Asia Tapeworms are brainless, spineless, gutless parasites – and this scientist loves them

There’s precious little to love about a tapeworm – or at least one might think. But Dr Janine Caira’s lifelong passion began on a beach in Baja California.

She was in her 20s, studying for her parasitology PhD at the University of Nebraska at Lincoln, when a friend who worked as a guard on the California-Mexico border invited her to join him – not for a traditional beach holiday but for a rattlesnake round-up.

So she hopped in her Subaru wagon and set out on a two-day drive southwest.

She missed the rattlesnake competition – her friend got the dates mixed up – so they went to Baja California instead. Caira suggested they walk down to a waterfront where fishermen were hauling the day’s catch onto shore.

“We had to eat,” she says. “And I wanted to dissect something.”

They bought two small sharks, and Caira cut both open.

One yielded a previously unknown variety of tapeworm – a tiny, squiggly creature with hooks on its head. Caira christened the discovery – her very first – for her border-guard friend, Evan: Calliobothrium evani.

Now a distinguished professor of ecology and evolutionary biology at the University of Connecticut, Caira is one of the world’s top specialists in the tapeworms of sharks and stingrays and has helped discover and name a whopping 170 tapeworm species.

As for the second shark? Caira laughs. “We ate it.”

Why would anyone devote her life to a brainless, spineless, gutless group of parasites?

If you have to ask that question, Caira says, you just need to get to know tapeworms a bit better.

These creatures vary in size and appearance. The smallest could fit on the head of a pin; the largest, found in the gut of a sperm whale, grows up to 30 feet long.

But their biology is basically the same. Lacking a digestive system of their own, they survive by absorbing nutrients inside another animal’s gut.

Contrary to popular belief, tapeworms do not usually cause their hosts to waste away. In fact, many animals can spend their whole lives with a tapeworm in their gut.

These creatures have probably coexisted with vertebrates for as long as we have been around; scientists cutting open a 270-million-year-old shark coprolite – a piece of fossilised poop – once found tapeworm eggs inside.

“It’s a super-long-term association,” Caira says. “And not only that, it’s a successful way of life.”

Their omnipresence suggests that parasitism is a great evolutionary strategy – but the secrets of tapeworms’ success remain a mystery.

“I’ve described hundreds of them, and all that means is I can tell you what it looks like and where it’s found,” Caira says.

“To me it’s just this fountain of the unknown elements of the world. I mean, we’re talking about a whole group of animals whose habitat is the body of another animal. Just think about that.

“There has to be really big advantages to being a parasite in order for your life cycle to be so complicated … So how on Earth does that come about?”

“It just has to be a whole different way of living,” she muses. “I think they have figured out answers to questions we don’t even know are questions yet.” 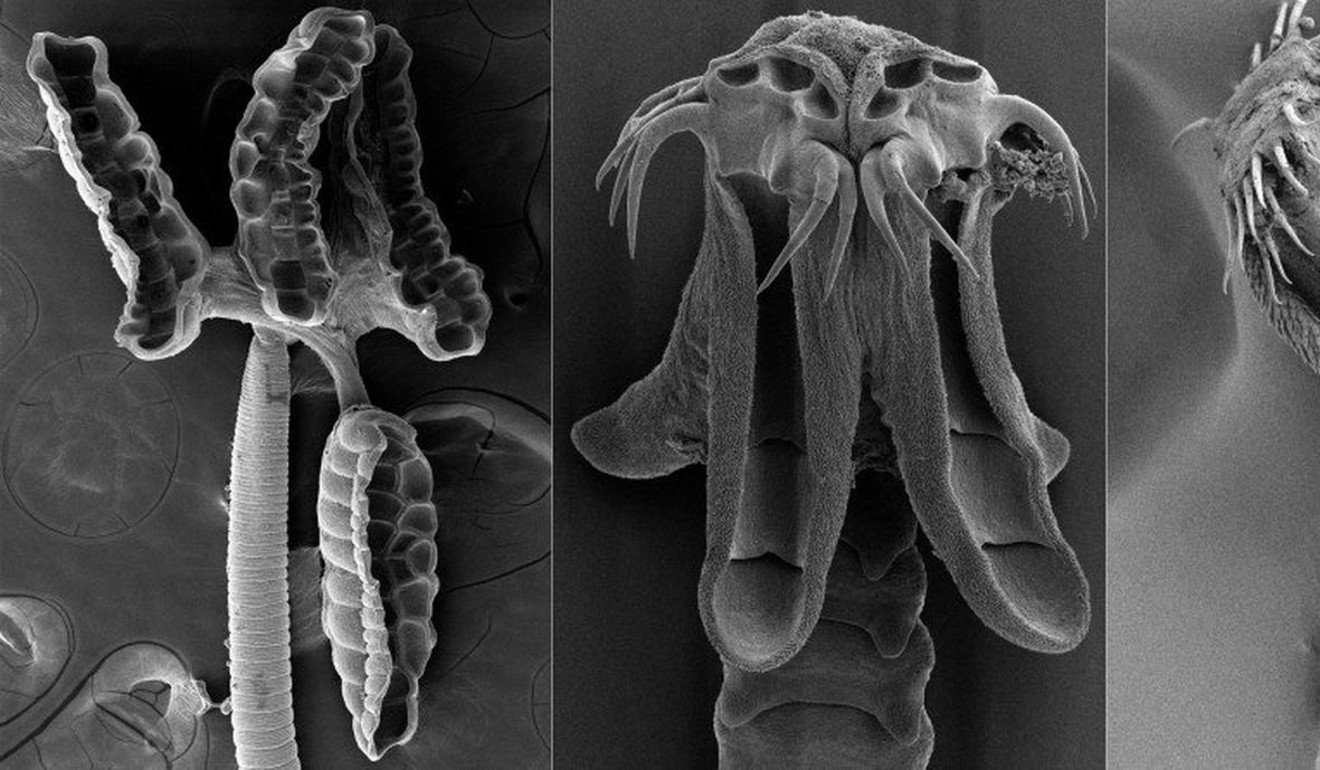 When I ask Caira about her favorite tapeworm, she directs me to Page 379 of her book, Tapeworms from Vertebrate Bowels of the Earth.

There I find a gray-scale scanning electron microscope image of the scolex (head) of Yorkeria izardi, named for an Australian fisherman who provided specimens for the survey.

“Isn’t that amazing?” she gushes.

The Y-shaped structure in the image is in no way recognizable as a head. Two elephant-ear-like lobes extend to either side; they are topped by pointed appendages resembling antlers.

“What are those? Antennae?”

“Those are hooks,” Caira corrects me. “That’s what it attaches to the surface of the gut with.”

“Oy.” I shudder. “I guess it’s kind of a face-only-a-mother-could-love thing?”

That makes Caira indignant. “Let me try another one.” In a matter of seconds, an email from her arrives in my inbox. Attached is a JPG labeled “Caira_tapeworm_eyecandy.” I open it.

This one is colorized in shades of blue, purple and green. Something about it reminds me of a carnivorous plant – not beautiful, perhaps, but undeniably impressive.

“This is actually a species that we auctioned to raise money,” Caira informs me. A dentist purchased the naming rights to the species for $3,000. “I’m just saying.”