In an office building in Shanghai’s Jingan district, cleaner Chen Wanqin uses a metal pincer to pick a small drinks carton out of a bin marked with the Chinese characters for “wet rubbish”.

“It’s not supposed to be in this bin,” she said, squeezing the dregs into a sink before putting the carton into a bin for dry waste.

“More than three months have passed,” Chen said. “People should have formed good habits, but some are still throwing rubbish in the wrong bins.”

In the past, most residents threw their rubbish out and forgot about it. Now, they are expected to sort wet from dry, and separate recyclable items from hazardous waste.

Last month, Shanghai mayor Ying Yong said that 80 per cent of the city’s residential communities had fallen in line with the new rules and he announced big increases in the amount of recyclable waste collected every day.

Recycling has become a long-term goal for Shanghai and created a cottage industry in phone apps to explain the rules. But time has shown that some of the city’s 24 million residents are reluctant to break old habits, while city leaders have acknowledged more needs to be done to get rid of the sorted rubbish the new system has produced.

“Shanghai took the lead among Chinese cities to be the first one to launch [compulsory] waste sorting,” said Liu Guangfu, a recycling specialist from the School of Economics and Management at the city’s Tongji University.

The problem was that there were not enough treatment plants for the wet rubbish the city churned out, he said. “It’s a big issue right now.” 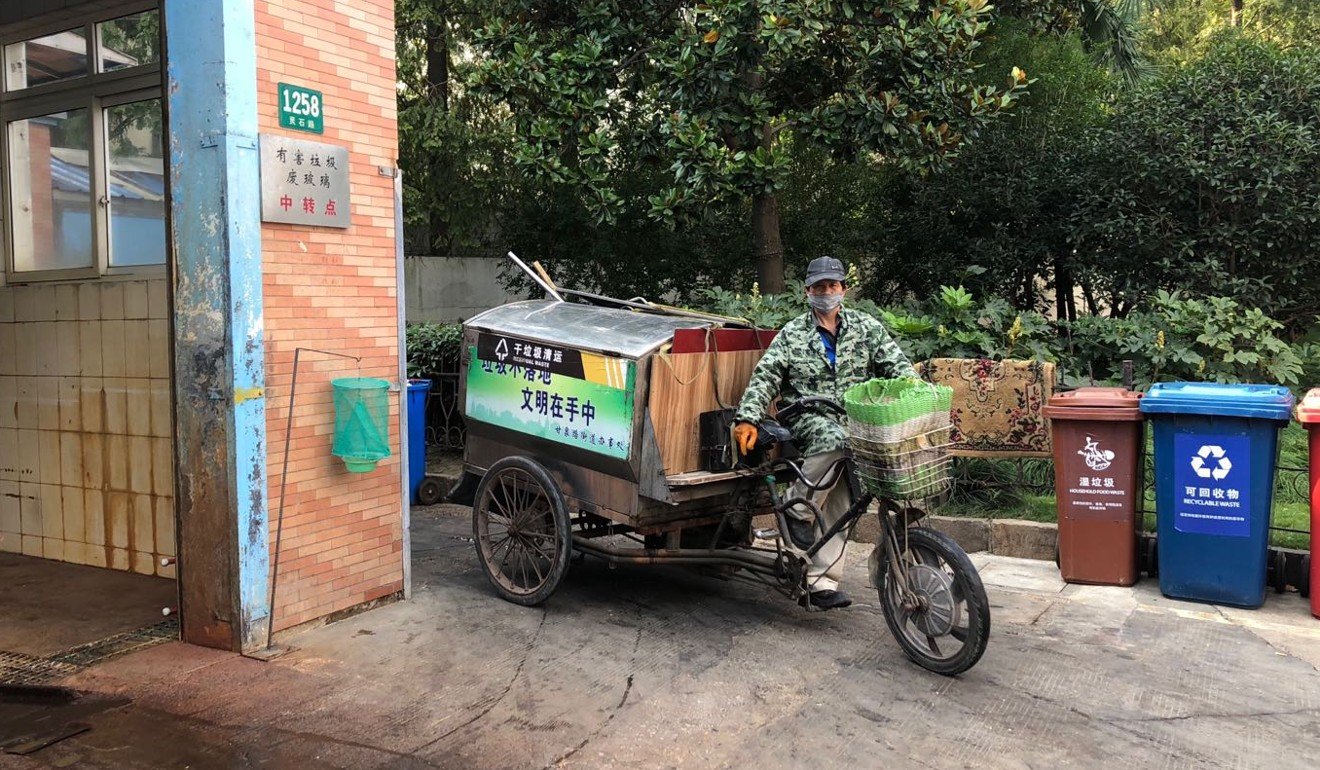 Shanghai launched its recycling scheme in July. Photo: Alice Yan
Lou Ziyang, a professor at the School of Environmental Science and Engineering at Shanghai Jiao Tong University, said the city’s 10 wet rubbish plants were struggling to cope with the more than 9,000 tonnes of waste they received every day.

“There is a gap,” he said. “Some new facilities are under construction, and it’s expected that Shanghai’s total treatment capacity will reach 7,000 tonnes per day in the next couple of years.”

Ying said Shanghai was trying to improve the situation and that the latest figures showed sorting made a difference.

“I’ve stressed many times that speeding up the building of processing and recycling facilities is more important than building more houses in Shanghai,” Ying said, without revealing how many plants would be built.

He said he expected the facilities to be completed by the end of 2022, by which time no household rubbish from Shanghai would be sent to landfill.

But veteran environmental campaigner Chen Liwen said the processing shortage showed Shanghai had not done its homework in time for July’s launch.

“I have not seen a good project in Shanghai for composting wet rubbish,” she said.

Liu said the city’s new waste scheme could be regarded as a political task, but it could not remain political forever and its success was in the hands of residents.

“Whether Shanghai can carry on this cause depends on the public’s sense of civic duty, as well as the authorities’ management and supervision,” he said.

Can China sort its household waste recycling problem by 2020?

While companies that ignore the new rules face fines of up to 500,000 yuan (US$71,000), and members of the public risk fines of up to 200 yuan, the Shanghai Landscaping and City Appearance Administrative Bureau, which is in charge of sorting, has also turned to technology to monitor collections.

“Not that long ago, we found a truckload of dry garbage that contained a lot of water. With the help of a chip embedded in the vehicle, we were able to trace the route and identify where the rubbish came from.”

The offending block was excluded from competing for community waste sorting honours, he said. 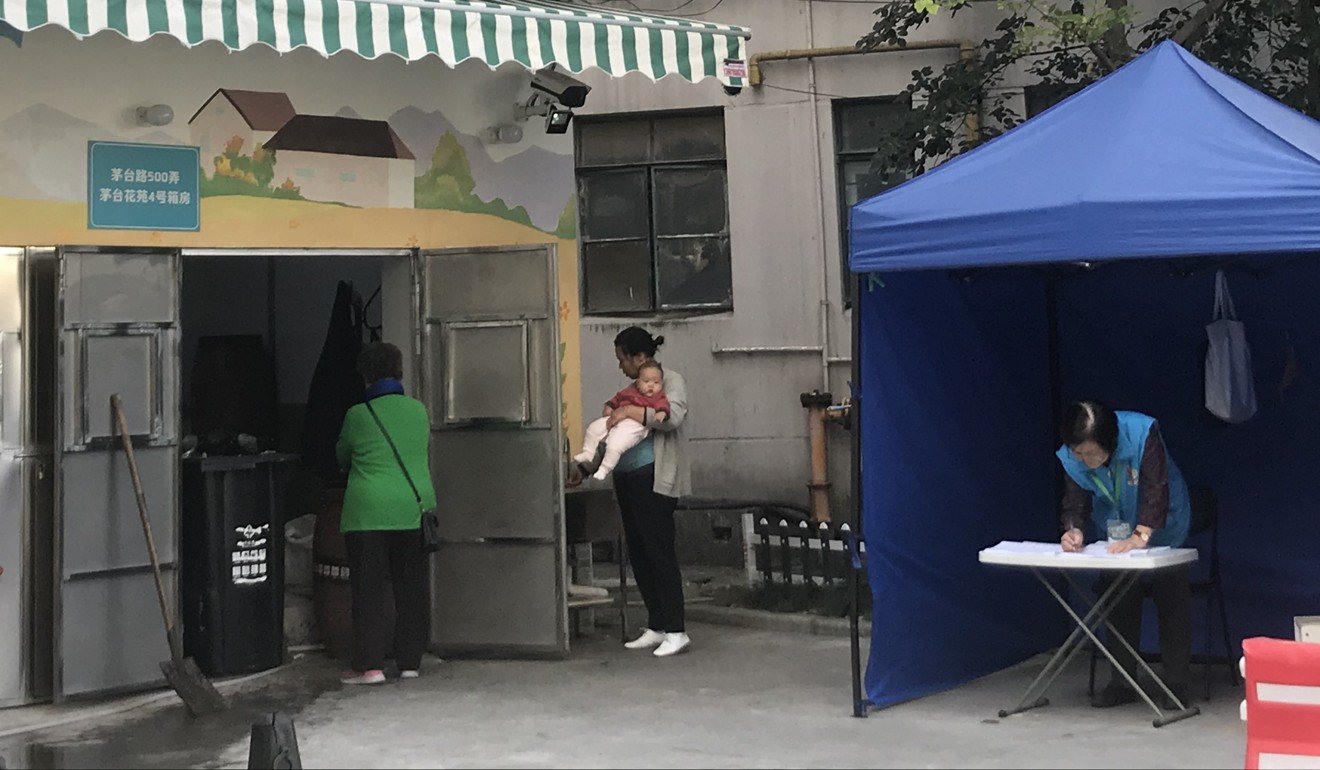 Shanghai residents can be fined up to 200 yuan for not sorting their rubbish properly. Photo: Alice Yan

Xu said the bureau was also stepping up recycling efforts.

“Previously, we buried or burned all of the rubbish. But now we are looking at how to make use of recyclable waste, like plastics and glass, and what to do with composted wet garbage,” he said.

Jin Yajing, a housewife from Changning, said she and her neighbours were coping with the new system thanks to the help of senior citizens who monitored the recycling, but it was not the case for everyone.

“I saw some migrant workers who didn’t listen to the volunteers and just threw all their household waste into one dustbin,” she said.

Lou said residents needed to understand the different categories of waste and learn how to recycle properly.

“Although many people classify their waste they do it in a haphazard way,” he said.

“For example, big pork bones are not wet waste because they don’t rot easily, and paper tainted with oil is not recyclable because of the oil – they should both be dumped into dry garbage bins.”