Home China News Number of faulty children’s vaccines in China surges to over 900,000

(CNN) Hundreds of thousands of additional vaccines intended for children have been found to be faulty, the Chinese government announced Wednesday, raising the number of known defective vaccines in the country to almost one million.

In a statement, China’s State Council announced a second batch of diphtheria, pertussis and tetanus (DPT) vaccines, produced by Changchun Changsheng Biotechnology, had been discovered to be “substandard” — 247,200 injections in total.

The vast majority had been sold to provincial authorities in Shandong, in China’s northeast, and some had already been administered to children, the statement said. But it insisted that other than being ineffective they were not dangerous in any way.

“The National Health Commission and the State Drug Administration have planned revaccinations for the children who had been (injected) with the substandard DPT vaccines,” the statement said.

In November, the government announced that another 253,338 DPT vaccines produced by the same company were defective, as well as more than 400,000 doses produced by a separate company, the Wuhan Institute of Biological Products.

The spiraling vaccine crisis came to a head in July when thousands of angry parents took to Chinese social media to vent their outrage at the defective medication.

“My home country, how can I trust you? You just let me down again and again,” one user said. 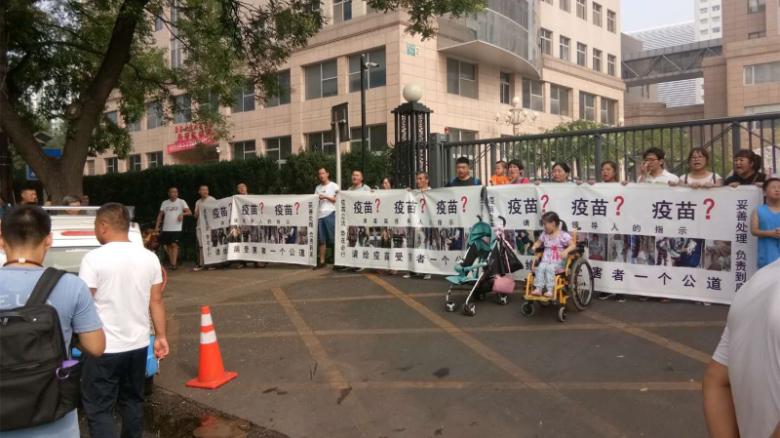 Small group of protestors hold a rare public demonstration over the vaccine scandal in front of China’s Food and Drug Administration in Beijing on Monday July 30.

In a rare display of public dissent, a small group of protestors protested for days at the end of July outside Chinese government buildings in Beijing, including the National Health Commission.

The ongoing vaccine crisis comes at an unfortunate time for the Chinese government, as it attempts to rebuild domestic and international confidence in the quality of the country’s food and goods after a series of scandals.

In 2015, a report announced almost half of China’s food-processing plants had failed to meet internationally acceptable standards.

Chinese parents are also still struggling to trust local milk formula supplies, 10 years after large quantities of a domestically-produced versions were discovered to be tainted with industrial product melamine.