Imagine a democracy where one in three citizens cannot decide who gets to rule their country.

Where citizens fleeing nuclear radiation and rising sea levels have been forced from their homes and must cast their votes by post.

Where a government spotting a political advantage strips them of the right to do so with a law that is ruled unconstitutional by the highest court of the land, yet will continue to be implemented anyway.

Sound like a dystopian vision of the future? Wrong, it’s the Marshall Islands today.
As the country prepares for a general election on November 18, the latest twist in a months-long legal battle looks likely to prevent a third of citizens from casting their ballots.

That is the upshot of a Supreme Court ruling in October regarding a 2016 law that stripped non-resident citizens of their right to postal votes. While the court ruled that the law was unconstitutional and could not be applied to future elections, it also decided it was too late to force the implementation of postal votes for this month’s polls.

Marshall Islands to maintain Taiwan ties, cites ‘concern’ over China’s influence. It is a ruling that will send diplomatic ripples far beyond the shores of this tiny Micronesian nation, population circa 53,000, and could even influence the China-US tug of war for influence in the Indo-Pacific.
That is because the 2016 law, ostensibly aimed at combating voter fraud, is widely seen as being to the advantage of President Hilda Heine, a staunch China critic and a pro-US voice in a land that is otherwise showing signs of rethinking its ties with Washington. 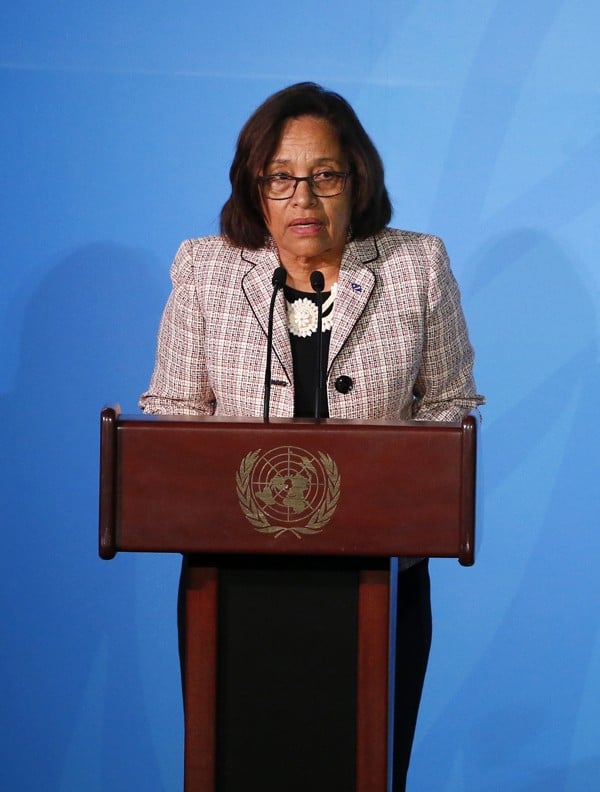 The Marshall Islands’ President Hilda Heine. Photo: AP
While the Marshall Islands has relied on Washington for economic and diplomatic support since gaining independence from the US in 1979, Marshallese are beginning to question what they see as American indifference to their challenges with rising sea levels and lingering radiation from the nearly 70 nuclear tests the US carried out on the islands during the cold war.
Some lawmakers have advocated turning to China for support. A plan by Rongelap Atoll Mayor James Matayoshi advocated learning from the “Hong Kong model” to create the “Rongelap Atoll Special Administrative Region” with the help of investment from mainland China. Matayoshi argued that the plan could turn his atoll from a “nuclear wasteland” to a “business haven” and it proved so popular with lawmakers that Heine faced a no-confidence motion when she opposed it.

Heine survived that vote by the narrowest of margins. The motion needed 17 votes to topple the government, but ended up as a dead heat at 16-16, as one lawmaker was receiving medical treatment overseas.

The experience was clearly unsettling for Heine, who subsequently accused Beijing of unfair influence. A Heine victory would also probably mean the Marshall Islands continuing its diplomatic support for Taiwan, which is otherwise growing increasingly isolated in its diplomatic tussle with Beijing. In September, Taipei saw its handful of remaining diplomatic allies dwindle even further with the defections of two Pacific island nations, the Solomon Islands and Kiribati. With just 15 official allies now left, Taipei may feel it has as much at stake in the November election as Beijing.

Still, such considerations lie largely in the country’s post-November 18 future. For now, there may yet be more legal surprises to come, given that Marshallese campaigners have spent months challenging the law in the courts and have vowed to continue doing so.

Already, the court’s decision has sent shock waves through the country’s large overseas diaspora, which has long enjoyed an unusually large influence due to its relative size and financial contribution.

Most Marshallese do not reside on their island of origin, primarily because of rising sea levels, a lack of resources in the remote atolls and the lingering nuclear radiation. 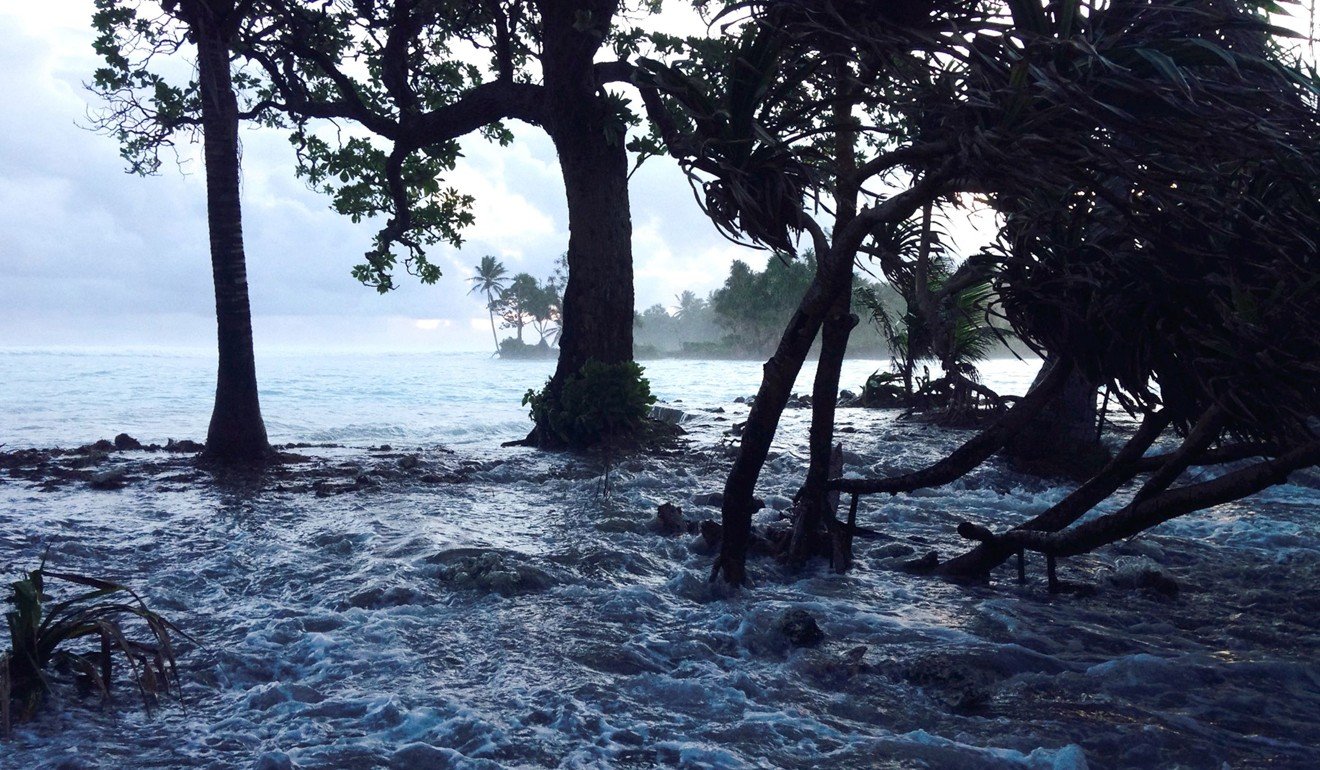 A high tide energised by storm surges washes across Ejit Island in Majuro Atoll, the Marshall Islands. Climate change and rising sea levels mean many Marshallese do not live on the islands where they grew up. Photo: AFP
Share:

Instead, the majority live either on outlying islands or abroad. Of the third or so citizens estimated to live overseas, most reside in the US and their remittances are crucial to the islands’ finances.

One of the poorest countries in the world, the Marshall Islands’ GDP was just over US$204 million in 2017, and almost 15 per cent of this was made up of personal remittances sent by the diaspora.

Marshallese-Americans have traditionally wielded political influence over affairs back home, with Marshallese politicians travelling frequently to Arkansas, Hawaii and California, where their fellow countrymen are concentrated, to seek support and blessings.

Explained: how Taiwan’s Pacific allies are being wooed by mainland China

Now many are struggling to come to terms with their looming loss of influence.

“The Marshallese in the United States are on the front line, advocating for our issues of nuclear legacy and climate change,” said Eldon Alik, the Marshallese consul general in Springdale, Arkansas. “I hate that this voting issue is creating division among our people.”

Increasingly, people are questioning Heine’s motivation for the law, asking like Mayor Matayoshi whether “some ministers now no longer see themselves benefiting from overseas voters”.

Marshallese elections tend to be very close run things, so any changes to who can and who cannot vote are bound to prove controversial.

This is particularly so given how crucial postal voting has been since the islands gained independence and adopted a constitution and a mixed parliamentary-presidential system based loosely on the US model.

During the 2003 national election, for instance, 58 per cent of the total vote was cast remotely.

But critics of postal voting argue that instances of voter fraud are holding back the modernisation of what is still a fledgling democracy.

For the past 40 years, tribal chiefs and influential clans have dominated the political arena, and it is only in the past couple of decades that elections have been contested by formally organised political parties.

Amata Kabua, the country’s founding father and traditional paramount chief, was elected as the first president and remained in office until his death in 1996. An election followed and, in 1997, his cousin Imata Kabua took power. In November 1999, Marshallese electoral politics turned a corner when Imata was replaced by Kessai Note and, for the first time, a commoner became the country’s most powerful man. 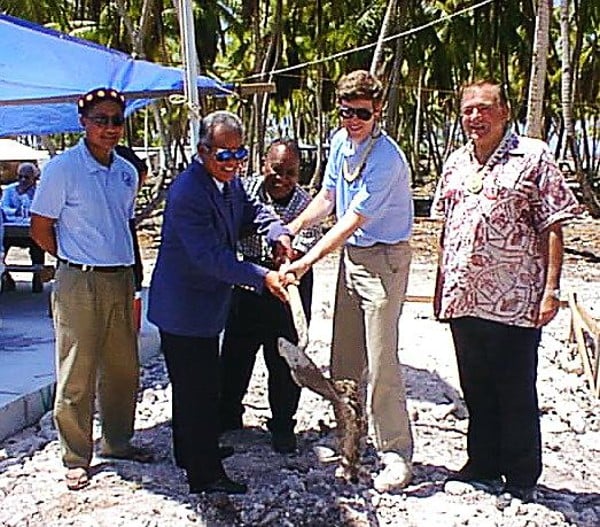 The Marshall Islands’ then president Imata Kabua, second from left, breaks ground for the Rongelap clean-up in 1999. Rongelap Mayor James Matayoshi is on the far left. Photo: AFP
Share:

At the next election, in 2003, two formally organised political parties contested the polls for the first time. Note managed to retain power but not without numerous complaints and legal petitions alleging postal ballot fraud.

While none of these allegations were proven, a team of observers from the Pacific Islands Forum in 2007 recognised the significance of the postal ballot – as well as acknowledging what it described as “administrative inefficiencies” surrounding the practice.

Results for numerous seats were still being decided by postal voters for the general elections of 2011 and 2015, the latter of which was won by Casten Nemra, who at 44 became the youngest person and only the second commoner to reach the highest office. This prompted a period of political instability, as a legislature dominated by independents opposed Nemra’s rule and effectively forced him from office within two weeks. In the aftermath of Nemra’s downfall, Heine emerged as president with a sweeping majority in a 2016 vote and became the first woman to lead an independent Pacific island nation.

Among her first pieces of legislation was the law about absentee voting, which stated that only those who pay taxes and actually live on the islands should get to decide who rules them. High costs, mismanagement and voter fraud were cited as reasons for the ban.

Critics have accused the Heine government of being motivated more by electoral maths than by voter fraud. “There is not a single piece of evidence of fraud presented to date by the government,” said Jack Jorbon, a lawyer who petitioned against the legislation.

“Complaints about fraud are an excuse to eliminate the postal ballot system so that registered citizens residing outside the country cannot elect their leaders.”

Jorbon and other campaigners see the Supreme Court’s decision as validation of their position. The court’s verdict stated that in the absence of substantial proof, the government’s claims of voter fraud were “illusory”.

Jorbon said that in traditional Marshallese custom, citizenship was based on land rights. “The right to vote is guaranteed under the constitution, and, like land rights, it follows the citizen anywhere they go,” he said, adding that overseas citizens tended to be against the Heine administration.

That is true for Lobbo Lajwi, a Marshallese-American living in Springdale, Arkansas. Lajwi feels strongly about his country and its politics and would vote by post if he could. But he cannot afford a return ticket home just to cast his ballot. Instead, he has written a song about his frustration with the Heine administration but says he dare not release it. He fears a backlash from home.