After 14 years of peddling “magical” shoe soles and edible sanitary pads to the gullible, the Quanjian Group health care empire is facing official scrutiny into every aspect of its operation, as Chinese authorities respond to public anger.

The health products company has been under fire since its marketing practices were linked with the death of a four-year-old girl in an explosive online report on Christmas Day.

Even a giant golden Buddha statue at one of Quanjian Group’s lavish hotel buildings is being looked into by the local religious affairs bureau, with talk of its removal for violating regulations.

Meanwhile China’s internet continues to be flooded with people’s accounts of their own experiences and calls for officials to thoroughly investigate the company, headquartered in the northeastern port city of Tianjin.

The scandal erupted when popular health website Dingxiang Yisheng – or Doctor Clove – recounted the story of Zhou Yang, the four-year-old cancer patient whose image was used by the company to promote its products, even as she lay dying in a hospital bed.

To this day, her father Zhou Erli told the South China Morning Post, he regrets the moment he pulled the little girl out of hospital and put her on what he calls a “shady secret prescription” from Quanjian Group.

Zhou Yang was diagnosed with a rare condition – sacrococcygeal teratoma, or a tumour at the base of her tailbone – in 2012. She had gone through surgeries and chemotherapy treatments, yet recovery had been slow.

When the family’s story was reported by state broadcaster CCTV, Zhou said he was contacted by someone he believed was a representative from Quanjian Group.

He said he was taken to meet its chief executive, Shu Yuhui, who told him the company had bought a secret cure to cancer. 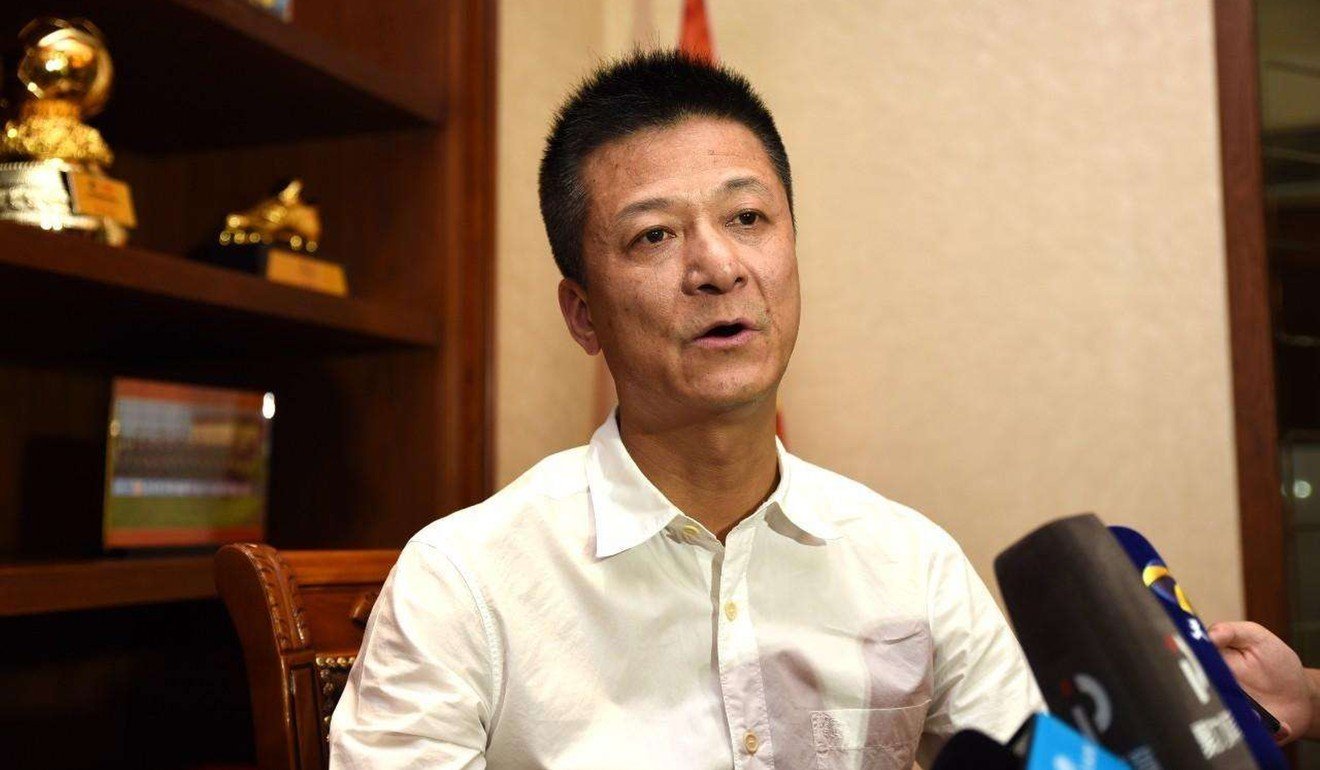 Zhou said he then bought some powder and a herbal drink in a plain bag, with no details or explanations, for 5,000 yuan (US$730).

He said he was told his daughter should give up all other treatments and concentrate only on the herbal remedy.

“They said she would be cured,” Zhou said.

But Zhou Yang did not get well. After a few months, her situation worsened and she had to be taken back to the hospital. She died in 2015.

Her father sued Quanjian but failed to prove the company was responsible for false marketing. He was also unsuccessful in persuading Quanjian to drop his daughter’s image from its materials after she had died. 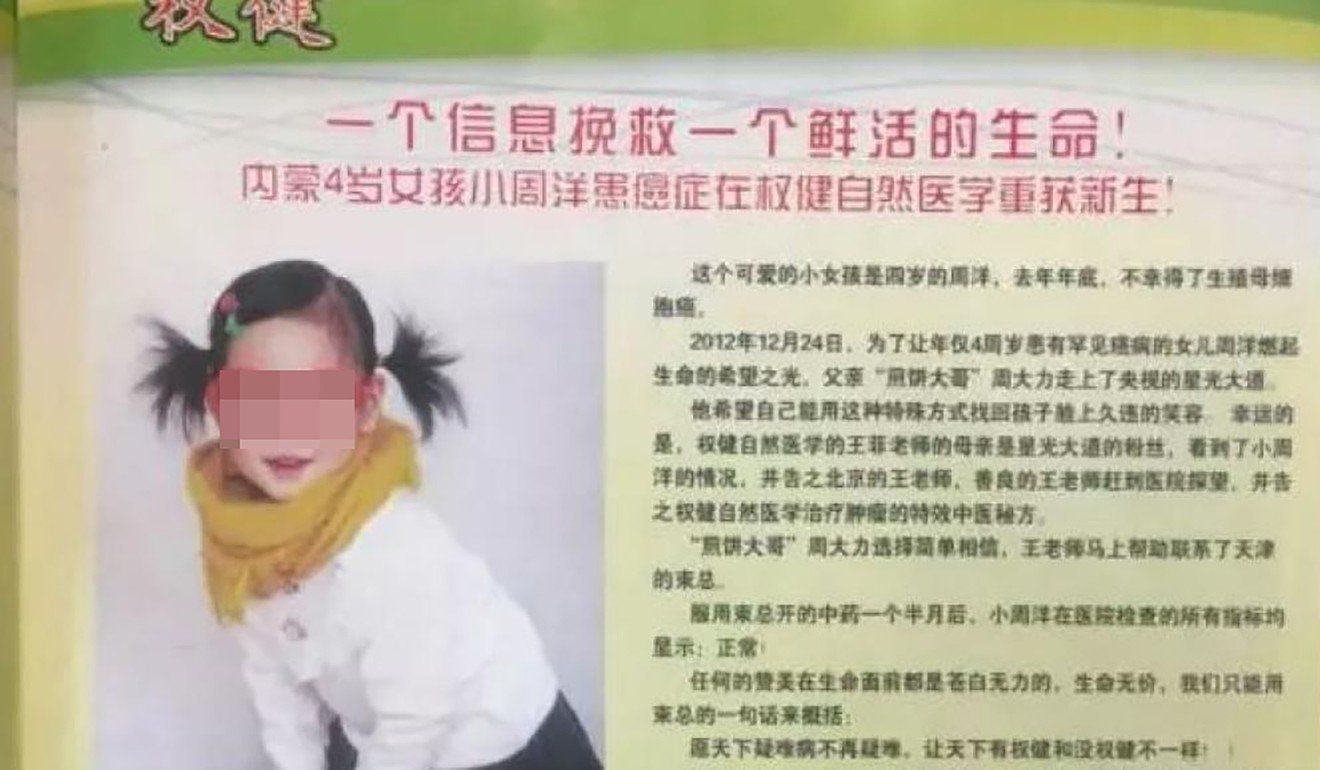 Authorities moved quickly after the Doctor Clove report, announcing an official investigation into allegations against the company of false marketing and the operation of a pyramid scheme. Meanwhile, Quanjian products began to be removed from e-commerce websites.

Everything related to the company is now under scrutiny, by the public and the authorities.

On Wednesday, an official said the local religious affairs bureau was considering whether to remove a golden Buddha statue – said to be tens of metres high – from a Quanjian hotel building in Yancheng city, Jiangsu province.

The official said the statue had not been approved by the bureau.

Local reporters who visited the hotel, which also serves as the company’s East China division headquarters, found a lavish and flourishing town.

Hotels, parks, training grounds and exhibition centres owned by Quanjian line the streets, and there is even a Quanjian People’s Restaurant.

The Quanjian empire has expanded over the past 14 years to include interests in cosmetics, herbal medicine, sports and finance. In addition to hotels, Quanjian owns a tumour hospital, a football club and an equestrian club.

The online community is also keeping the scandal alive. Many people have taken to the internet to recount their own experiences with Quanjian products, including a magical shoe pad that can “balance your skeleton”, and ionised pads the company claims can cure gynaecological diseases.

Health care products are big business in China. A recent report by the China Food and Drug Administration found 2,317 companies licensed to make such goods in 2017.

But problems are also common. The same regulator recorded 26,966 complaints about health care products in 2016 and dealt with 705 cases. Figures for 2017 were not separated into their own category and are therefore unavailable.

Chinese media also carries frequent reports of elderly people spending their life savings on health care products. There are hundreds of companies which are unchecked and unregulated.

Since her teenage years, Song Sha has seen her mother spending thousands on pills and powders from a number of these companies. At first, it was not too serious. Song, now 30, said her mother once paid 68 yuan a tube – 10 times the normal price – for toothpaste based on claims it would be more effective than other brands.

Song, who lives in central Changde in central China’s Hunan province is now facing a life and death battle against her mother’s faith in unregulated remedies.

“She was diagnosed with lung cancer a while back, but refuses to go to the hospital for treatment,” she said.

“She says the health products are enough for nutrition, and hospitals con your money.”

Song has tried for years to reason with her mother without success. Instead, her mother’s belief in the products and pseudoscience behind them has only seemed to grow deeper.

On one occasion, Song said she awoke to find her mother standing at the foot of her bed, with needles in her hands, trying to poke holes in her feet – part of a new practice she learned from one of these companies called “bleeding therapy”, which claims losing a little bit of blood can help dispel illness.

“There’s no saving them, nothing works,” Song said. 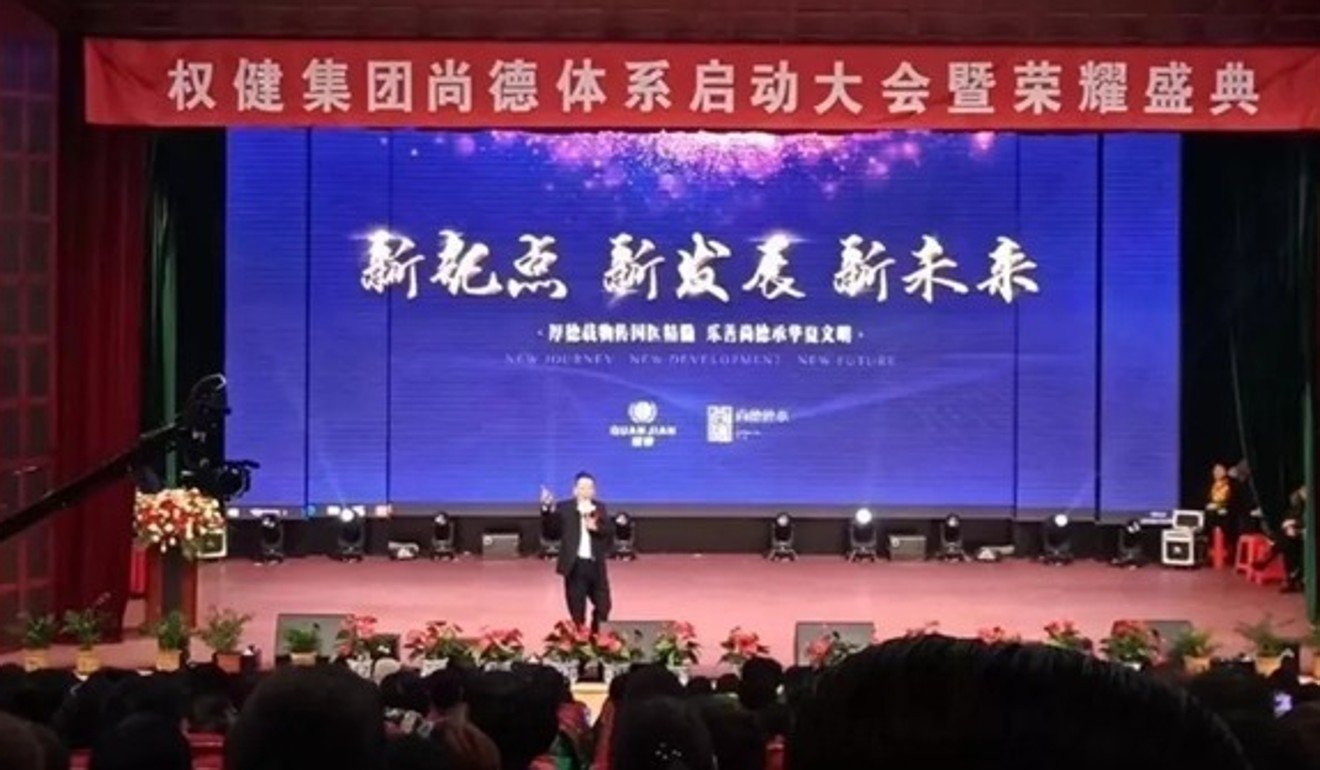 Victims like Song’s mother fall prey to these schemes mostly because of false advertising and a lack of government supervision, according to Li Enze, a food safety lawyer at Beijing Impact Law Firm.

In China, medicine and health care foods, or dietary supplements, are produced and supervised according to different regulations and standards. In one set of regulations, the health ministry defines them as “foods that are beneficial to health, suitable for certain groups, but not with the goal of curing illness”.

In theory, companies can only advertise the functions of their products according to this category, but in reality, there is quite a bit of chaos. Companies like Quanjian have been able to operate for years, due to the lack of supervision and complicated jurisdiction between government departments.

“When it comes to drugs and health care products, the China Food and Drug Administration has jurisdiction. State Administration for Industry and Commerce takes care of advertisements released in public places, such as in pharmacies.

“When the advertisements are placed on TV or social media, then the Ministry of Industry and Information Technology comes into play,” Li said.

“So in reality, these departments pass the buck between them.” 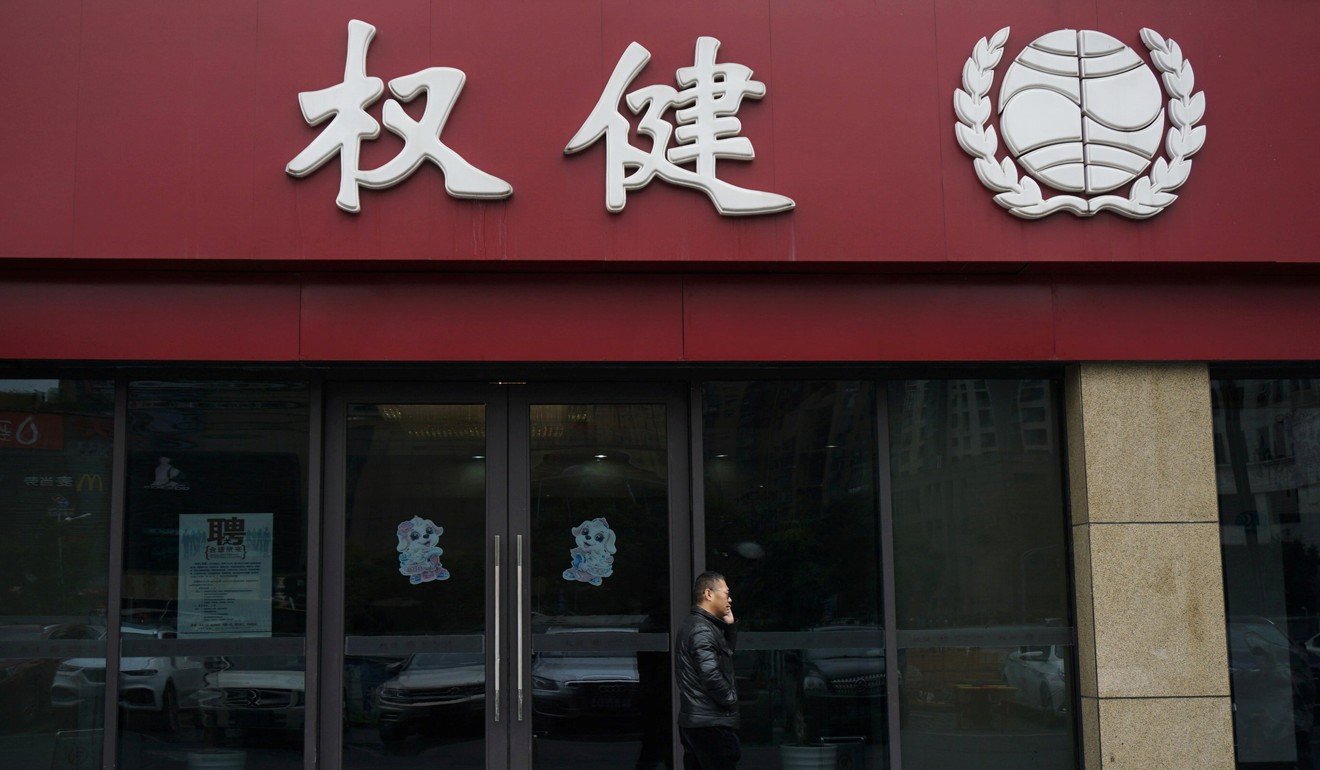 Li said many direct sales practices, such as those deployed by Quanjian, were also under suspicion as potential pyramid schemes.

While direct sales were permitted, he said, the line between direct selling and a pyramid scheme – in which people were encouraged to enrol “members” via promises of payments or services and benefits through fees – was thin.

Chinese media has reported numerous cases of people consistently losing money on membership fees and continuing to enrol friends and neighbours into these schemes which use lectures and training classes to reinforce their claims in people’s minds.

In some cases, according to media reports, pyramid scheme companies kept their members physically locked in, attending classes, eating and sleeping under supervision. Mobile phones were confiscated and “members” were prevented from contacting family members or wandering around alone.

Whether Quanjian is operating a pyramid scheme is currently under investigation.

The company certainly has firm believers in its products, with many voicing their support for the group despite the scandal.

Even as she lay on a hospital bed, Hangzhou local He Xiaolan said there must be a reason Quanjian’s products have not cured her illness.

“Their products might work differently for people with different conditions,” she said.

He was diagnosed five years ago with Sjogren’s syndrome, an autoimmune disease that causes dry glands and mouth. Doctors prescribed her with a hormonal treatment but, after consulting a representative from Quanjian, she bought its reishi mushroom powder.

Her condition worsened and a month ago He’s friends took her to hospital by force. A friend, surnamed Shen, said He had spent thousands of yuan each month on the products, making the payments on her phone.

His attitude is reflected in the public anger in China over the Quanjian case. Many of those sharing their stories online are calling for the official investigation to get to the bottom of the company’s practices and not let the matter quietly die down this time around.

“I hope this time the Quanjian cheaters can receive the punishment they deserve, so Zhou Yang may rest in peace,” Zhou Erli said.

“Justice can also be served for hundreds of thousands of victims.”