Home Asia China developed a ‘Laser AK-47’ that sets fire to targets and is...

The ZKZM-500 laser assault rifle has been classified as “non-lethal” meaning it is less likely to kill a living being than conventional weapons, such as knives and firearms but it still poses a threat.

But the blaster features fearsome characteristics and is said to be able to instantly “carbonise” human skin and shoot out energy that passes through windows.

A scientist who worked on the prototype and asked to remain anonymous, said the weapon is capable of burning “through clothes in a split second.”

The researcher, who took part to both the development and the field testing of the weapon at the Xian Institute of Optics and Precision Mechanics at the Chinese Academy of Sciences in Shaanxi province, told South China Morning Post: “If the fabric is flammable, the whole person will be set on fire.

“The pain will be beyond endurance.”

The weapon has been given the nickname “laser AK-47” because they both weigh around 6.6 pounds and have a 15mm calibre.

But unlike its more common sibling, the laser version is much more threatening, according to another researcher.

Explaining this weapon’s laser can’t be seen by the naked eye and omits zero sounds, the source said: “Nobody will know where the attack came from.

The blaster’s characteristics make it ideal to be used for anti-terrorism purposes. 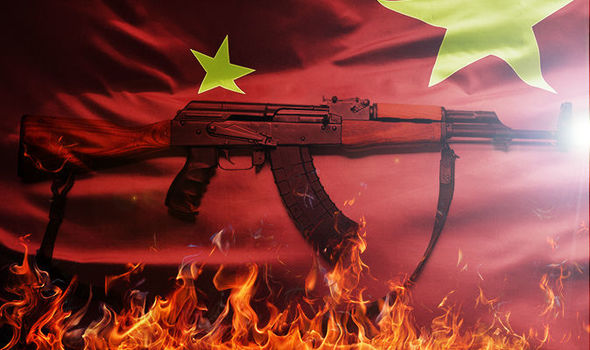 According to the South China Morning Post, the weapon is now ready for mass production and the first units it will be given to will be the Chinese Army Police anti-terrorism squads.

The existence of the laser AK-47 has been confirmed by an official document published on the Chinese Public Service Platform for National Civil-Military Integration website.

There, the authors of the paper go through the basic functionalities of the weapons and explain how the government could use it.

The document argues law enforcement could counter “illegal protests” by setting fire to banners from a long distance.

Adding chilling detail, authors also say protesters’ hair and clothes could be set on fire which, they continue, would mean they lose “the rhythms of their speech and powers of persuasion”. 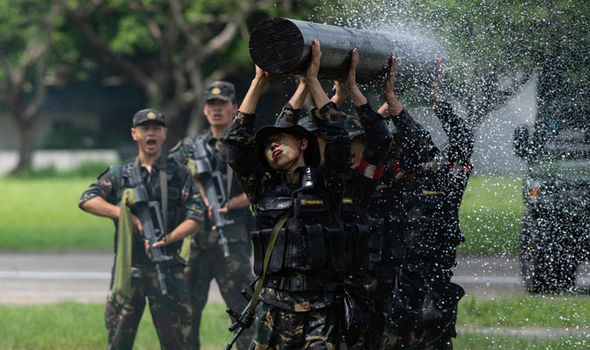 This weapon lasers could be used by anti-terrorism squads 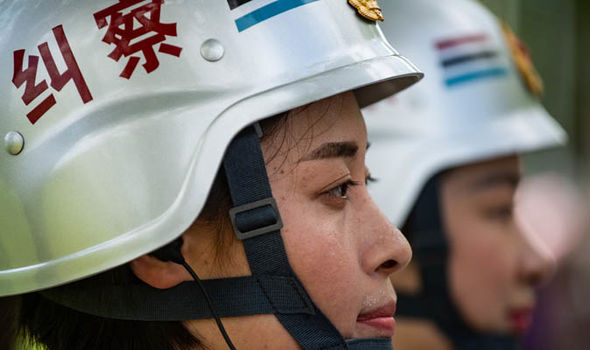 The laser of the ZKZM-500 can carbonise instantly human skin

This blaster isn’t the first example of laser weapon fired by China.

The US government filed a formal complaint in June after a laser fired from a Chinese military base in Djibouti caused two pilots of suffer minor eye injuries, the Wall Street Journal reported.

And the US military claimed 20 more similar attacks on American aircrew have been documented since September 2017.

All of them would have taken place around the East China Sea, an area contended by Beijing, Japan and South Korea.