The development of e-vehicles draws a lot of attention. New car models, self-driving vehicles and everything that comes with the vehicles of the future. Many countries aim to push the transition to e-Vehicles, either as a part of their smart city ambitions, their transformation towards a circular economy or simply to decrease pollution levels.

In the world of e-vehicles, the Dutch have their own ambitions. The Dutch government aims to only have zero emissions cars sold by 2030 and only have new energy vehicles on the road by 2050. Many manufacturers already anticipated on these developments and heavily invested in R&D. The Netherlands is well known for its high tech chips, but also for high-end coatings and electric busses. 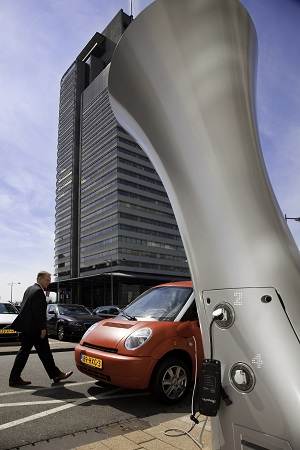 One field in which the Netherlands excels is charging infrastructure. After all, many new energy vehicles rely on electricity. In this area, the Netherlands has a lot of expertise. The Smart Solar Charging initiative in the Dutch city of Utrecht is a good example of this. The system uses locally generated solar energy and offers this through charging stations. However, when more energy is being produced than used, the energy is stored so it can be shared with the community when necessary. This way, no energy is wasted, and the community has access to clean energy for their new energy vehicles.

Providing clean energy for new energy vehicles is key, since the promise of zero emissions is heavily dependent on the type of electricity which is being used. After all, if the electricity is being won from polluting resources such as coals new energy vehicles may not be as clean as they seem. Besides solar energy, hydrogen is another promising source of energy for new energy vehicles. Hydrogen, after all, can be won from clean resources and emits as such no greenhouse emissions. For instance, the Dutch Team Fast of Eindhoven University is building a system to generate electricity through hydrogen and carbon dioxide from formic acid, which is distilled from ants.

But keeping new energy vehicles clean is also about recycling parts. The batteries, if not recycled correctly, can cause a whole new environmental issue. Earlier this year, China announced to be introducing recycling channels where people can correctly deposit their old batteries. For this, they will closely cooperate with car manufacturers.

Autonomous cars of the future

But also in the area of self-driving vehicles there are many developments. For instance, the Chinese government expects these vehicles will account for 10 per cent of car sales by 2030. Chinese search giant Baidu received the go-ahead to start testing their autonomous vehicles in the areas surrounding Beijing earlier this year, aiming to launch them publicly as early as next year. Their system, called ‘Apollo’ has already received a lot of international attention, partnering up with partners worldwide to bring it to the next level.

Working towards the new energy vehicle energy goals may be challenging, but developments seem to be increasing in speed. Governments are promoting and facilitating developments in this fields with funding and legislation. With high-tech solutions such as chips, open-source autonomous vehicles and energy from ant-acid, the development of cars of the future is speeding up. Quickly.